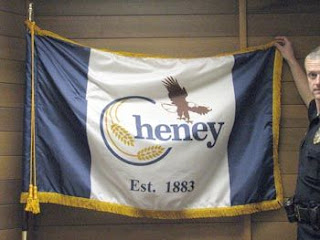 By DAVID TELLER
Staff Reporter
Residents will soon notice a slight change in Cheney, high above the roof tops.
The city of Cheney has a new city flag, which can be seen in the council chambers and will soon be visible atop flag poles at the Police Department, the Public Works building and at City Hall.
Planning commissioner Graeme Webster and Cheney Police Cmdr. Rick Campbell designed the gold-fringe bordered flag, which features the city logo in a white field, with dark blue fields to the left and right of the white.
City Administrator Arlene Fisher went to a conference in Olympia, Wash., she realized many cities have a flag, but Cheney doesn’t. Campbell said he and Webster got to talking during a VFW pancake feed and decided to take the initiative and design one.
A brainstorming session produced a sketch, which Campbell finalized on his home computer. The design was simple.“We took the city logo and put it on a flag,” Campbell said.
They later approached Fisher with the design and she gave her blessing to go ahead with getting the flag made.
Webster explained the choice of the colors. He said white represents purity and blue represents passion and tradition. Webster’s earlier choice of color was of a lighter shade of blue, but that was changed to a dark shade because the contrast was stronger and it resembled the blue field on the American flag. Campbell said he likes the color scheme too.
Webster said the flag is an asset to the community and that Cheney is more than just where Eastern Washington University is.
The designs were taken to Murray Chemical Supply in Spokane, who also sells flags. Murray submitted the design to long-standing flag manufacturer Annin & Company, based in Roseland, N.J., who printed the flag. The city paid almost $1,025 for 10 flags.Fisher said an unveiling of the flag is not currently scheduled, but speculates it would be later in the fall, perhaps during Veteran’s Day.
David Teller can be reached at dteller@cheneyfreepress.com