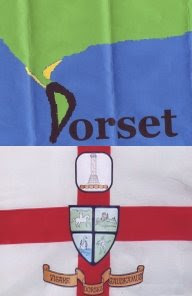 Latest ideas for county flag
By Ian McDonald
A NARROWBOATER has come up with a novel idea for a Dorset flag - the one he has been sailing under for the last 12 years.
Grayham Rosamond, from Shipton Gorge near Bridport, needed a flag to sail under when he began narrowboating across the country.
So he opted for producing his own Dorset-related ensign - and reckons it is the perfect solution to the Echo's hunt to find a county flag.
Interest in finding a design for Dorset was fuelled when Dorchester reader David White came up with his own idea.
He is hoping his red, yellow and white design will be adopted by Dorset County Council as the official county flag.
Since then fellow readers have been sending in their own flag ideas to the Echo as the search for a unifying emblem for Dorset continues.
advertisement

Mr Rosamond's flag design is based upon the St George's Cross and features Hardy's Monument standing on a 'Bridport dagger' - a piece of rope.
The submission also boasts a shield, divided into four quarters, which features the White Horse of Osmington Hill, Corfe Castle, the Cerne Giant and an Abbotsbury swan.
Mr Rosamond's design also includes a banner that reads Vitare Gaudeamus, which means 'let us enjoy life'.
He said: "Being a canalamaniac, the need arose for a flag to sail under when narrowboating in various parts of the country.
"Being disenchanted with the Union, no longer proud to be English and flatly refusing to have anything to do with the European flag, the one great pride remaining in belonging came from living in and being part of Dorset. The flag causes great interest wherever I go and has to be explained and toasted in true Dorset fashion."
Weymouth reader Anita Blake also took the time to send her Dorset flag design to us here at the Echo.
Her idea is based on the county's distinctive coastline and uses the isle of Protland's outline as the 'D' in Dorset.
Mrs Blake, from Broadwey, said: "Flags don't normally have wording, so I thought this too would be different."
Thank you to all our readers who have sent us their submissions in our hunt to find a flag for Dorset.
Our search is now over and we will be sending the flags we have received to the county council, so it can consider whether to adopt any of them as the official Dorset flag.