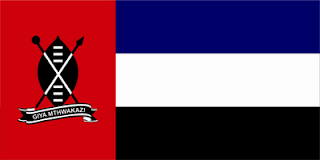 Mthwakazi Liberation Front (MLF) is serious about prospects of a breakaway state and have gone a step further by unveiling a conceived Ndebele State national flag.

In a statement on Monday, MLF secretary-general Paul Siwela said they intended to officially hoist the flag when their plan to form Mthwakazi nation in 2018 materialises.

He said the flag, which features red, blue, black and white colours in addition to a shield, spear and a knobkerrie, symbolised the struggle for the independence of Matabeleland.

“Red stands for the blood of our heroic forefathers who fought many battles to create our great nation and state resisting colonialism in the 19th century,” reads the statement.

“It also represents all who died during the war in Rhodesia and those killed by the Zimbabwe government.”

He said from 1980, Mthwakazi people had suffered much humiliation, genocide, marginalisation and domination first by the British and now by rival local ethnic groups.

Siwela said the shield, spear and knobkerrie signified the weapons which were used by the Matabele State standing army during the 19th century.

“All ethnic groups found in Matabeleland, including the Shona who desire to make it their permanent home, are entitled to be full citizens of the republic,” he said.

Here is the meaning of our flag

The Red stands for the blood of our heroic forefathers who fought many battles to create our great Nation and State and gallantly fought to resist colonialism during the later part of the nineteenth century. It also represents all who died during the war in Rhodesia and those who were dastardly killed by the Zimbabwe government for refusing to recognise the Zimbabwe state as is currently constituted. Since 1980 up to date our people have suffered much humiliation, genocide, marginalisation and domination first by the British and now by Zimbabwe. Once more our people stand ready to claim their land and sovereignty and are ready to sacrifice for such a noble cause and establish the Republic of Matebeleland

The Matebele state had a standing army that was well above ten thousand by mid nineteenth century and all able bodied men above the age of eighteen years and single were conscripted into the army. The Army was made up of various battalions and spread throughout the state. It also had the intelligence unit which had separate command structure from that of the army. The weapons used were spears and knobkerries and the shield used for cover during the fight. It was later that guns were Incorporated into the military arsenal of the army. The guns were part of the Rudd Concessions between the British Imperial agents and King Lobengula. It is worthy to note that the British forces led by Major -General Frederick Carrington failed to defeat the Matebeles during the Anglo-Matebele war of 1896 when the British imperial forces were fighting using the Henry-Martin rifles, maxim guns and machines guns while the Matebele fought using both the spear, knobkerrie and shield and some regiments fought using the Henry-Martin refles. The shield, spear and knobkerrie stands for courage, stoicism and sacrifice to the Matebele people.

The Matebele people have the folklore that they descended from the skies and are children of the stars where there is peace and stability. It was and is still recognised that the sky is blue and we get our rains from above and that where there is no water there is no life. So the colour Blue stands for stabilitiy,peace.life and water,whose combination projects progress and development.

When the white people arrived in Matebeleland, they were allowed by King Mzilikazi to marry black women and some married the Kings daughters and when King Lobengula sent his two envoys to meet Queen Victoria In London in 1888,Queen Victoria gave the emmissaries her necklace and photo to King Lobengula. That represented mutual trust, co operation and desire to bridges between the two races. The white colour stands for white people including Arabic and Asiatic nationals and peace and we believe through mutual respect and co operation we can build a better world where both black and white people including other races i.e Asiatic, Arabic etc can can live in harmony and share the development, progress, stability and resources together. It is our intention to invite many white people to come and settle in our new Republic of Matebeleland and help to build our country and share the resources. We have a beautiful country that is rich in various natural resources. The white colour also represents peace, development and progress and its our belief that both black and white people in future Republic of Matebeleland will develop this state to be the future Singapore of Africa.

The Black colour represents all people of colour who commit themselves to be citizens in our Republic. Black colour represents authority, fairness, equality and justice according to Matabele beliefs. So all ethnic groups found in Matebeleland including the shona people who reside in Matebeleland and desire to make it their permanent home are entitled to be full citizens of the Republic and be entitled to equall opportunities and duties like any other ethnic group found in Matabeleland Republic. We are aware that not all Shonas hate Matebeles and not all Shonas like what President Mugabe is doing to the Matebeles. Furthermore we desire to live side by side in peace with the Republic of Zimbabwe as our neighbour and co operating with each other in all areas of human endevours, and this would include all our neighbours in the region.