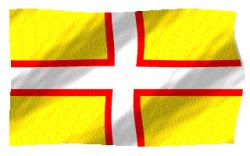 Flying the flag for Dorset...
By Louise Dunderdale
A FLAG for Dorset could soon be flying above buildings, along with publicly available stickers and badges.
The town criers of Dorset, including Wimborne crier Chris Brown and Wareham crier Jacquie Hall, recently backed the idea of Dorset having its own flag.
Dorchester man Dave White said: "The idea came about 2005 between me and another guy who lives in Sweden now.
"It started to roll at the beginning of last year. In the last couple of months I joined forces with the town criers who have really started to put it forward."
Wimborne town crier Chris Brown said he had noticed that Wiltshire had its own flag while he was at the Trowbridge town criers' competition last year.
"I was saying we need a flag in Dorset."
"This is a people's flag for the people of Dorset."
He added: "We want to raise enough sponsorship to get into production."
Mr Brown said any extra money generated would be ploughed into buying more flags, which he hopes will fly everywhere.
Dorset County Council has a flag with a white background and three lions but it is for county council use.
The Dorset flag is named after Saint Wite, whose remains are at Whitchurch Canonicorum in West Dorset.
The Saint Wite's Cross as the Dorset Flag has a cross design, in red and white, the colours of the county council arms and the Cross of St George, along with gold.
The third colour is to represent Dorset's beaches, Golden Cap on the Jurassic Coast, Gold Hill in Shaftesbury, the hard worked grain fields and as a reference to the Dorset Regiment and the Gold Dragon of Wessex.
For details including how to sign up, see the website flagfordorset.org.uk