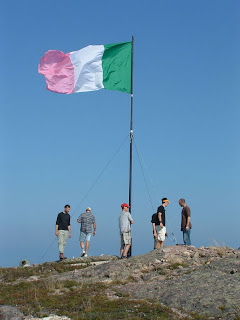 Victoria Day weekend marks the fourth anniversary of the raising of the Pink, White and Green on the Southside Hills — a tradition that began when Ryan Pugh was driving home from university and spotted a summit that needed a flag.

“I came to the intersection of Prince of Wales Street and LeMarchant Road,” says Pugh. “At that spot, looking across the harbour, (I had an) unobstructed view of the Southside Hills’ peak.

“I realized that this was one of St. John’s most visible locations and it existed as a blank slate … a flag was demanded.”

Pugh chose the Pink, White and Green because his family once thought they were related to its rumoured founder, Bishop Michael Fleming.

Fleming supposedly created the flag in 1843 as a sign of peace between feuding English and Irish sealers making a living hauling wood for churches and schools in St. John’s before the hunt.

Using his white handkerchief to tie the pink flag of the English and the green flag of the Irish together, he said the white was to honour his friend, William Carson of Scotland, who had recently died.

A 2003 article for The Independent by historian John Fitzgerald stated there is no evidence to support this tale. Its origins remain a mystery, but Fitzgerald traces the flag back 163 years.

“(The official flag) never really fancied me due to its garish angles and points,” says Pugh. “There is no lore to (Christopher) Pratt’s design and at least the Pink, White and Green has a story — even if the story is considered dubious by some.”

Pugh recruited three friends and over the long weekend they stitched their own nine- by-four-foot tri-colour flag and raised it on the Southside Hills.

Unfortunately, it was hard to see from across the harbour, so in 2005 they made a nine-by-15-foot flag and raised it 30 feet.

“The flag … could be seen from any clear vantage point in the St. John’s area,” says Pugh. “With the offices of The Independent on Harbour Drive, they couldn’t help but see the flag.

“Obviously it wasn’t a stretch for them to see the value in the flag: young Newfoundlanders fighting against the weather to plant a 15-foot handmade flag in a pile of rubble at the top of the Southside Hills.”

In 2006 The Independent financed the erection of a 30-foot custom steel flagpole at the site and has been raising the flag every May 24 weekend since.

The tri-colour flag is often associated with Newfoundland independence and secession from Canada. Living Planet, a local store that silksscreens its own clothing, uses the flag on several products, including a shirt with the caption Newfoundland Liberation Army.

Storeowner Dave Hopley says he doesn’t advocate the province separating from Canada, but views the flag as “the people’s flag.”

“Certainly most Newfoundlanders are proud of their heritage and it’s part of that,” he says. “The only caveat I have about the flag is I think some people think of it as a Townie flag … and I don’t really want to exclude rural Newfoundland from the sentiment.”

Pugh doesn’t support secession either and says while he prefers the tri-colour to the official flag, he would like to see a mix of the Pink, White and Green and the Labrador flag to represent the province.

“If the flag were adopted as is, it could be perceived as ignoring Labrador,” he says. “A lot of our province’s productivity comes out of the Big Land and to ignore that on the provincial flag would be an injustice.”