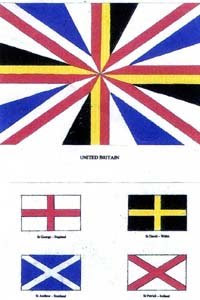 Welsh-influenced Union Flag launched at Llangollen
Jul 16 2008 By David Simister
A CONTROVERSIAL campaign to redesign the Union Flag with Welsh elements has been launched by an English flag fanatic at the International Eisteddfod in Llangollen last week.
Campaigner John Yates, from Milton Keynes, has amended the nation’s favoured flag to include the colours of the traditional Welsh flag, and is hoping the Welsh people will get behind his bold new design.
"It just came like a bolt out of the blue to me. With two crosses and two saltires in the four flags of the UK countries, it was an entirely natural design of flag," said John, 60.
Mr Yates says the Eisteddfod, held last week at Llangollen’s Royal International Pavilion, was a natural place to garner support for his proposals, because it was exactly two years ago at the 2006 Eisteddfod when he came up with the idea for his creation.
"I had struggled with the idea of a new Union Flag for over 30 years but it was at the Eisteddfod that I saw someone selling the St David’s flags. It was like an answer to a maiden’s prayer."
The new design mixes the three existing flags from the United Kingdom - England’s cross of St George, Ireland’s saltire of St Patrick and Scotland’s blue and white colours - with the black and yellow cross of St David, used by many as an unofficial flag for the Welsh nation.
Wales’ official flag, The Red Dragon, was not included in Yates’ design because it did not match the aesthetic embraced by the Union Flag.
Clwyd South MP, whose constituency includes Llangollen, said he welcomed the proposals.
"I fully support better representation of Wales on the Union Flag. I have signed a parliamentary petition supporting such a change along with several of my Welsh colleagues. The flag should mean something to everyone in the Union and instil pride in Great Britain as a whole."
Yates says that along with parliamentary support, he has also received favourable comments from the Queen regarding the new design.
For more information and to support John’s campaign, contact 01908 606362.
YourVale

Welsh dragon call for Union flag
The union jack should be combined with the Welsh flag, according to an MP who wants the change to be made to reflect Wales' status within the UK.
In a Commons debate, Wrexham's Labour MP Ian Lucas said Wales' Red Dragon should be added to the union jack's red, white and blue pattern.
He said the union jack currently only represented the other three UK nations.
But Stewart Jackson, Conservative MP for Peterborough, said the plan was "eccentric" and would be unpopular.
"I do not believe it would add to the unity of the country," he said.
However, Culture Minister Margaret Hodge conceded that Mr Lucas had raised a valid point for debate.
She said the government is "keen" to make the Union Jack "a positive symbol of Britishness reflecting the diversity of our country today and encouraging people to take pride in our flag".
And the minister acknowledged that a number of people across Britain were unhappy about flying the Union Jack as they felt it does not "truly represent the United Kingdom".
However, she said redesigning the flag had not been part of a consultation currently being carried out.
'State of grace'
Their comments come after a Commons debate in which Mr Lucas said: "I believe that the Union Flag should change now to reflect the four nations of the United Kingdom - England, Scotland, Northern Ireland and Wales."
He argued that the UK "did not exist in a constitutional state of grace".
"Changing an iconic image such as the union flag may appear to be more difficult to achieve than 200 years ago, but nonetheless I believe the change is right," he said.
"Let the debate begin, let the rest of the world know that the iconic symbol of the United Kingdom may change and that the reason that it will change is that we have a new constitutional settlement that affords Wales its true place in the Union."

No me gusta nada.