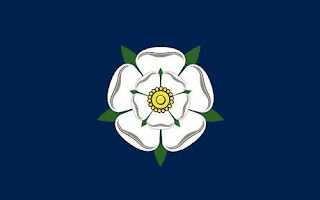 Yorkshire flag is legitimised at last
For years they have faced having to pay the charge for flying their emblem, a white rose on a sky-blue background, because it was not registered as an official flag.
Anyone can fly a national flag without applying for planning permission because they are exempt under the Town and Country Planning Act.
But unregistered flags are not, and are deemed to be subject to local authorities' "advertisement consent". Consequently those flying such flags must apply for permission to do so first.
Now the Flag Institute, which regulates the flags used by counties and other local bodies, has finally agreed to register the white rose flag as an official emblem.
In 2003 the situation was highlighted by Andrew Wainwright, a farmer and bed and breakfast owner in Sproxton on the edge of the North Yorkshire Moors.
He was summoned by Ryedale District Council for flying the flag.
Mr Wainwright said at the time: "On my own land I fail to see why I can't fly it, and I fail to see any objection to it. It's a lovely flag."
Fellow villagers ordered scores of the flags in a mass protest, and the council later backed down.
The Flag Institute approved the Yorkshire banner after an application by the Yorkshire Ridings Society.
Councillor Chris Abbott, of the society, said: "The Institute approved, as our flag has been in common use since at least 1964."
The White Rose of York was probably introduced in the 14th century by Edmund of Langley, the first Duke of York. It was adopted by the county at large during the Wars of the Roses against Lancashire, which sports the red rose.