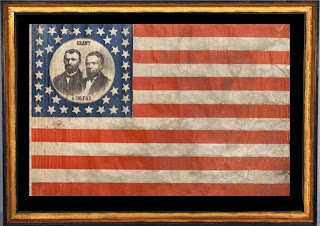 Presidential candidates John McCain and Barack Obama are far more reverent of the American flag than contenders of centuries past. Flag desecration wasn't a concern for candidates of the 1800s and early 1900s, who routinely plastered their names and faces over the red, white and blue to advertise their campaigns.

A fascinating but short-term exhibition of political banners dating from 1840 to 1904 at George Washington University's Luther W. Brady Art Gallery reveals the imaginative use of Old Glory by winners and losers alike. The show closes Saturday with a round-table discussion from 10 to 11:30 a.m. at the gallery on flag history and collecting.

The president with the shortest term in office, William Henry Harrison, started the tradition of political flags, and the earliest design in the show advertises his 1840 campaign. It centers on a log cabin superimposed over 17 stripes instead of the standard 13 representing the original Colonies.

An 1844 campaign flag for Henry Clay is more irreverently emblazoned with a raccoon thumbing its nose at the moon - the animal was the symbol of the Whig Party - while other flags from the 1800s sport platform slogans and portraits of presidential hopefuls.

These artful designs represent about half of the 80-piece collection amassed by GW alumnus Mark Shenkman, a New York money manager who serves on the university's board of trustees. Five years ago, Mr. Shenkman began buying the banners after he came across an American flag painting by artist Jasper Johns being sold for millions of dollars on the art market.

"I realized I could have the genuine article for significantly less," he said by telephone, noting that the flags advertising losing candidates are more valuable than those for winners.

His first acquisition, a 36-star parade flag, was made for the 1868 Republican presidential campaign of Gen. Ulysses S. Grant and Schuyler Colfax. Greeting visitors in the first gallery, it portrays Grant and Colfax in a circular medallion surrounded by stars. Such a depiction of both presidential and vice-presidential candidates on a flag is highly unusual, and just three or four examples of this style are known to exist, according to the exhibit text.

A campaign kerchief for Zachary Taylor freely used the flag.

In addition to flags, Mr. Shenkman and his wife, Rosalind, collect patriotic textiles and kerchiefs. The exhibit displays several engaging examples, including a sepia-toned bandanna made in 1852 to advertise presidential candidate Gen. Winfield Scott, who is pictured in front of his horse.

The rarest flag in the show, according to the collector, portrays the bespectacled newspaper editor Horace Greeley, who lost the 1872 presidential election to Grant. Another of Grant's losing competitors, Gen. Horatio Seymour, who ran in 1868, is promoted by a banner superimposing a $5 bill over the stripes. It is meant to criticize the devaluing of the dollar under Abraham Lincoln, whose name is shortened to "Abram" on another flag.

Apparent throughout the show is the freewheeling interpretation of the Stars and Stripes as a promotional device. Bold, graphic impact appeared to be more important for the candidates than the accurate representation of our Colonies and states, and the orientation of their symbols.

A portrait of Stephen Douglas, who ran against Lincoln in 1860, is surrounded by 44 stars, even though there were just 33 states in the Union at the time. A flag supporting Grover Cleveland is presented backward with the stars printed in the upper right corner.

In 1905, Congress banned the use of the flag in such advertisements, but even after that law was passed, the practice of adding text and images to the Stars and Stripes continued. Seven years later, President William Howard Taft issued an executive order regulating the proportions of the flag and arrangement of the stars.

At the end of the show, a greater respect for the flag is evident in several banners. Portraits of the men who ran for president and vice president in 1900, for example, are placed next to Old Glory rather than on top of it.

However, as deference to our national emblem increased, the political banners became less visually appealing. The 20th-century political ads in the exhibit merely appeal to patriotic sentiment rather than the distinctive punch of each campaign, as reflected in the earlier, more whimsical manipulations of stars and stripes.

WHAT: "Stars and Stripes: The Political Flag Collection of Mark and Rosalind Shenkman"