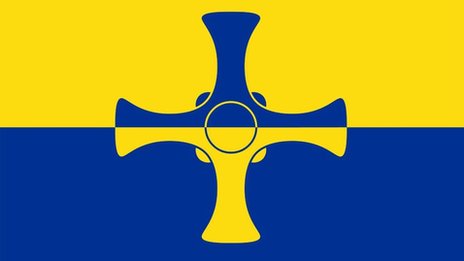 Twins Katie and Holly Moffatt, 19, from Chilton used their favourite colours, blue and yellow, and St Cuthbert's cross, a county symbol, in the flag.

Their father James said he was proud that "in 100 years' time, their flag will still be flying above the county".

The county was the only one in the north of England without a flag, according to the Flag Institute.

Previously, there have only been flags representing the city of Durham and the county council.

The winning flag will be registered in the Flag Institute's UK Flag Registry.

Mr Moffatt said he had been hopeful after his daughters made the shortlist but did not think they would win in his "wildest dreams".

The competition was organised by adventurer Andy Strangeway from Yorkshire, who has already established flags for the historic East, North and West Ridings of Yorkshire.

A panel of senior county councillors chose the top six designs, which were then put to a public vote.